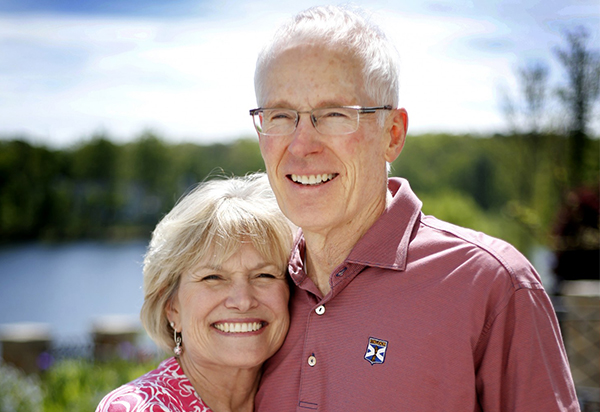 “I will give you the treasures of darkness, riches stored in secret places, so that you may know that I am the LORD, the God of Israel, who summons you by name.”
(Isaiah 45:3, NIV)

I have held onto this promise from the Book of Isaiah ever since March 2010. In my Bible I wrote, “Given to me, a sweet promise that even in the hardest of places, God will be with me, hold my heart in His hands and see me through.”

Fifty years ago today, I married the love of my life. Richard captured every inch of my being from the moment I laid eyes on him; a handsome seventeen-year-old high school senior. If cupid really does exist, he shot his arrow right into my heart on our very first date. Richard was the whole package for me, wrapped up in “beautiful paper and ribbon.”

To say our relationship was perfect would be a lie and you would know it. The bumps and bruises Richard and I experienced during our years as husband and wife strengthened our bond, instead of weakening it. Enduring through the struggles tightened the hold of the promises we made to each other on August 17, 1968. “For better or worse, richer or poorer, in sickness or in health until death parts us,” were untried and tested when we made our covenant that beautiful and perfect day. However, in the days and years that followed, Richard and I saw some better days and some worse days. We started out poor by most standards and eventually opened the door to wealth and means. But, the toughest of all tests came in the days of Alzheimer’s when through sickness and health, to endure loving was no longer just words but the fulfillment of the promise.

I have often said that if I were the one with dementia instead of Richard, he would be a better caregiver to me than I felt I was to him. Although I tried to do my best always, he just naturally had the ability to show love and grace in the most difficult of circumstances where I struggled. I would say to Richard, “I wish I could trade places with you!” His response was always, “no, Sherry, the grandkids need you to be here.” Even when I write these words, tears fill my eyes as I hear his words again so sweetly spoken through his pain.

When God brought Richard home to heaven, I believe my heart went with him. But in God’s promise to “give treasures of darkness, stored in secret places,” everyday is filled with the knowledge that I did love in this world and was loved deeply in return—not by a flawless man but by a man of honor and integrity beyond question. A man who would lay down his life for me, a woman who is greatly flawed.

I hold in my hands today one of the many anniversary cards given to me by Richard. In his unique handwriting the envelope says, “ Sherry, my love.” The words by the author of the card state:

After all these years, I still remember so clearly the early days of our marriage—

those special times we’d set aside just for the two of us.

Our needs may have been simple and our surroundings modest, but our love made those moments together ones I’ll always treasure…

We’ve come a long way since then. We’ve known success and we’ve weathered a few storms, but after all these years,

the thing that still matters most to me is that I have you beside me.

And, then again in his own handwriting he said, “Sherry, this card expresses exactly how I feel about you and us. Love always, Richard.”

I share this with you today, on what would be our 50th wedding anniversary because I want to offer a tiny piece of the memories I hold dear—memories held only by me now. Thank you for allowing me to indulge just a little on this special day.