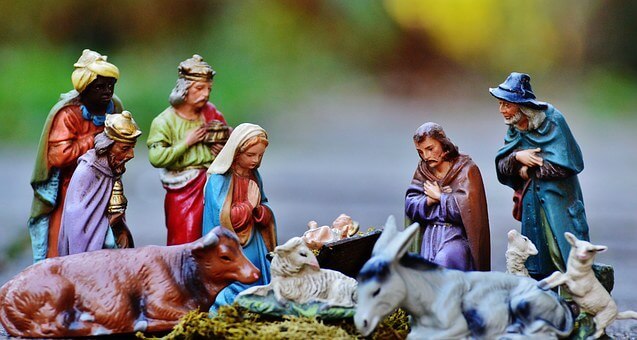 “While they were there, the time came for the baby to be born, and she gave birth to her firstborn, a son. She wrapped him in cloths and placed him in a manger, because there was no room for them in the inn.” (Luke 1:6-7, NIV)

You may have seen the video that has gone viral on social media. Let me set the stage.

The Christmas pageant is moving along beautifully, just as planned. The young choir is singing Silent Night, Holy Night, while the live nativity plays their parts. The six and seven-you-old Mary and Joseph are seated behind the manger that holds the baby Jesus, and the manger is surrounded by three, maybe four-year-old human “sheep.”

All is going well until one of the sheep decides to take baby Jesus out of his manger and proceeds to rock him rather vigorously. Mary leaves her position to go and snatch Jesus away from the sheep and return him to his manger. The three-year-old sheep doesn’t like this move one bit! So, she manages once again to get baby Jesus until Mary, who is now being followed around by Joseph, wraps her arm around the neck of the sheep in a half-nelson maneuver and takes her down. All the while, the choir sings, “Silent Night, Holy Night.”

While there is any number of metaphors, we can take away from this scene, the one that most readily comes to my mind is that sometimes when we least expect or want it, life gets messy, but it’s the reality. We all too often set ourselves up for disappointment, especially during the Christmas season, when we anticipate experiencing the kind of scene from a Norman Rockwell painting. Instead, our lives more resemble the story above, good intentions but filled with chaos and confusion.

If we give deeper thought to what the night Jesus was born actually looked like, it would have been anything but serene and peaceful. Mary and Joseph had to make the trip to Nazareth to pay their taxes; something to which we can all relate to as often being a stressful time of the year. And, Mary was obviously nine months pregnant; not the most convenient time to be riding on a donkey. Then, there were no rooms available, so they slept in a barn, and sure enough, Mary gives birth while there.

Friend, I don’t know about you, but this whole situation makes me glad I live in this century, as inconvenient as it can sometimes be. This season, this year, I pray we all remember and accept that “life does get messy.” Enjoy the Gift of Jesus and the eternal life (not perfect life) He came to deliver. He loves YOU! Now, that’s quite something to celebrate, wouldn’t you agree?