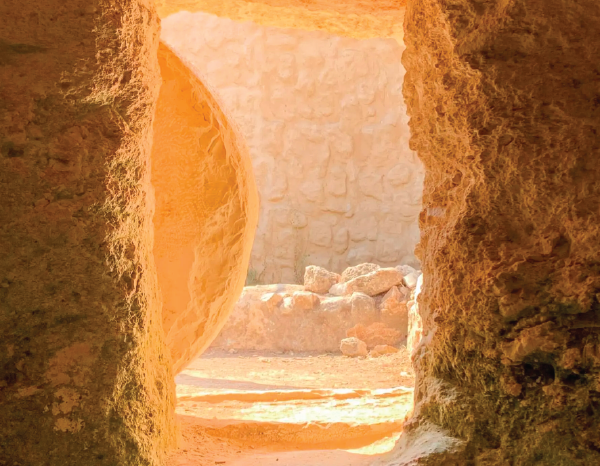 “’Woman, why are you weeping? Whom are you seeking?’ [Mary], supposing Him to be the gardener, said to Him, ‘Sir, if You have carried Him away, tell me where You have laid Him, and I will take Him away.’” John 20:15, NKJV

Looking for someone in a crowd can be challenging. If you have ever waited in a congested airport to pick up a friend or loved one, finding the familiar face can be difficult in the rushing sea of people. Sometimes, we hold up signs, balloons, or use some other method to stand out in the crowd.

Imagine Mary Magdalene quietly approaching to the tomb of Jesus on the third day after His burial; she did not want to stand out! She was frightened of being seen by those who had crucified her Lord. No signs, no balloons. But the tomb was empty! Where was He? Who had taken His body away? Mary ran to tell Simon, Peter, and another disciple. After searching the tomb and finding no clues, they went back home to hide, more afraid than ever leaving Mary standing outside the empty tomb alone. Of course, anyone familiar with this scene knows it is the resurrection story of Jesus Christ after His crucifixion. Although Mary does not recognize Jesus immediately, He asks her, “Whom are you seeking?”

In the Christian community, we are entering into what is known as Holy Week. As we remember the life of Jesus leading up to His crucifixion, we must first “walk” the way of the cross. As Jesus hung on the cross, many of His followers ran away out of fear for their lives. Who was this man, Jesus? They thought they knew Him, but did they, really?

On Easter Sunday, you may be celebrating with the masses of Christians around the world, but where are you today? Are you afraid of being recognized as a follower of Jesus Christ in a world that is turning more and more hostile toward Christians? Jesus asked Mary, “Whom are you seeking?” He is asking you and me the same question. Are you looking for Jesus? Do you know Him? He sees you; He knows you, and He loves you. He died for you and conquered death and the grave so that you might live in heaven for eternity. Let Him know you are looking for Him, and He will be found.